The Nidderdale Greenway is a cycleway that runs from Harrogate to Ripley, a distance of about 4 miles. Sustrans worked on it for about 15 years before it officially opened on 25th May 2013. They have published a leaflet/map of the route.

The route is shared by cyclists, walkers (including dog walkers), joggers, and horse riders. Signs ask cyclists to use their bells when necessary, and to slow down when passing walkers; walkers are asked not to block the path, and to keep their dogs under control. It's important to be considerate to other Greenway users, and polite and friendly.

The Greenway is definitely suitable for children and less confident cyclists. It's a good place to learn to ride a bike away from traffic.

The main Nidderdale Greenway route is shown in green on the Google map, and the other colours are routes to get to it, plus the Hollybank Lane extension in blue.

The Start of the Nidderdale Greenway in Harrogate

In High Harrogate, at the Dragon Junction, there's a footbridge over the railway. Go over the footbridge, and turn right at the far end.

After a short distance, there's a fork in the path (now signposted). The left fork goes into Bilton, and is signposted 'Knox Mill Lane'. Take the right fork for the Nidderdale Greenway.

This first section tends to be the busiest, because it curves around the edge of Bilton. There are more walkers/dog walkers here than there are from the Nidd viaduct on, so if you're on a bike, go carefully.

A short way along the cycleway, you come to a junction, where there's a right turn to Starbeck (also along a disused part of the Leeds & Thirsk Railway).

Soon after the Starbeck turn, the Greenway crosses a road, Bilton Lane. (One of the schemes in Harrogate's 2015 Cycling Delivery Plan is to install a raised/ramped junction surface here, which would be an improvement. Come on then!)

You would turn right here to Old Bilton and the Beryl Burton cycleway to Knaresborough. To continue on the Nidderdale Greenway, cross Bilton Lane (Nidd Gorge information board on the other side of the road), and go straight on.

After a short distance, there's a bench on the left. The people illustrated in the iron sculptures are Malcolm Margolis, a Harrogate cyclist and co-founder of Wheel Easy, and Keith Wilkinson, a founder member of Bilton Conservation Group. The third character is a child from Harrogate, representing future generations of local people. There's a Sustrans leaflet explaining the portrait bench.

It's about another kilometre from the junction with Bilton Lane to the Nidd Viaduct. The path is at its widest here, and there are spectacular views over the sides.

Nidderdale Greenway: Nidd Viaduct to the A61

There's now a scenic stretch, through Viaduct Wood, then with nice views across wheat fields to Nidd Moor Farm (on the right). There are a couple of buildings on the left, at Holme Bottom, and views of Killinghall beyond.

The route passes through Sig's Wood, just before a fork in the path. The right fork is closed, but it's the trackbed of the old railway line to Ripon. How fantastic would it be to have a walking and cycling route to Ripon? The Greenway takes the left fork, which is the start of the Nidd Valley Railway.

After the fork, there's a stretch with open fields on either side, then more woods. There are bluebells and wild garlic here in Spring.

At Limekiln Wood, the path descends slightly, and runs very close to the river Nidd.

It then goes up and meets a minor road, where you turn right to the A61.

Nidderdale Greenway: Crossing the A61

There's a pedestrian/cyclist crossing of the A61, which often takes a ridiculous amount of time to change. North Yorkshire County Council are to blame.

By the way, the other side of the A61 and down to the left is where the first station on the Nidd Valley Railway used to be. It was called Killinghall at first, then Ripley Valley.

Cross the A61 and veer right on a path past the monument built (just!) in time for the Tour de France 2014 by dry stone waller Gordon Simpson.

The path continues a short distance across a field to Ripley.

You cycle through the car park (where there are loos) to the centre of the village.

There's cycle parking outside the Boar's Head pub (Sheffield stands on the cobbles) and outside the tea rooms.

Video of the Nidderdale Greenway

This video of the Nidderdale Greenway shows the route in about 4 minutes:

These are some photos of the Nidderdale Greenway and Ripley, from my Flickr page (toggle right and left to see the pictures). 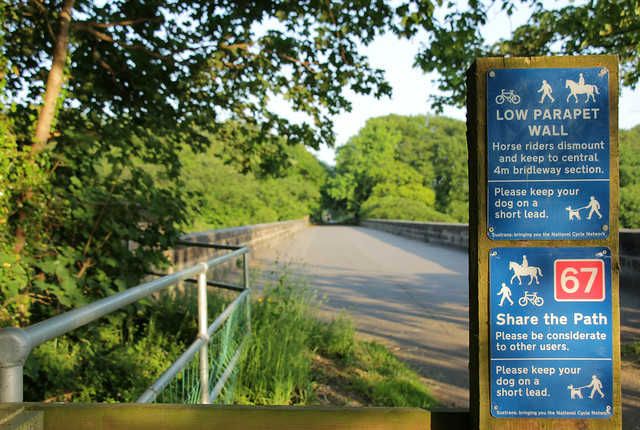 Bike Rides in Harrogate and Nidderdale

Bike Rides in Harrogate and Nidderdale includes the Nidderdale Greenway, with lots about the history of the area, sights and attractions, and wildlife.

There are other family bike rides too, plus mountain bike rides, and a range of road bike rides from 17 to 96 miles.

Each ride comes with a map and GPS files that you can upload to a device in your preferred file format.

"This is a beautifully presented book...Compact and well laid out. A must for locals and visitors." Reader review, October 2020.

Find out more about Bike Rides in Harrogate and Nidderdale, and buy a copy.

Rob Cowen's book Common Ground is based on the author's in-depth exploration of the 'edge land' bounded by the Greenway and the river Nidd.

He recounts the building of the Nidd Viaduct by the Leeds & Thirsk Railway Company in 1846-7.

When he first visits (before the Nidderdale Greenway existed), he says of it: 'Unneeded, unnoticed, I found it shut-off, shackled and destitute, left to the plumes of dead Oxford ragwort and buddleia that bristled from its cracks...to me the viaduct's scale and size seemed extraordinary, so too the sense of rectitude, the way the arches reflected nobly, silently in the river.'


Bike Rides In and Around York

Bike Rides In and Around York starts a city tour of York, then there are wonderful family, road, and mountain bike rides.

It's intended to inspire you discover York and the surrounding countryside on two wheels.

Each ride comes with a map and GPS files that you can upload to a device.

'This book is simply a treasure trove not only of great rides but also as a travel guide to the area.' Reader review, July 2021.

Find out more about Bike Rides In and Around York, and buy a copy.

Ripley is dominated by its castle, which has been there since the 1400s. The present owner is Sir Thomas Ingilby.

You can visit the castle by guided tour, or just the lake, gardens and deer park without a guide. There's a store that sells ice cream, a pub, and tea rooms near the castle.

Find out more about Ripley.

Getting to the Nidderdale Greenway

There are various ways of joining the Nidderdale Greenway, depending where you're starting from.

From Harrogate station, via the Dragon cycleway

The cycleway follows the railway, then ends where it meets Grove Park Avenue.

Turn left down Grove Park Avenue, then take the footbridge over the railway, and follow the main Nidderdale Greenway directions above.

From the Stray, via Claro Road

There is a good route to the Nidderdale Greenway from the Stray via Slingsby Walk and Claro Road. It is shown in orange on the map.

Slingsby Walk is a good shared cycle and walking path across the Stray. Cross the busy A661 Wetherby Rd (where there should be a crossing) and the A59 Knaresborough Rd, cycle along Granby Rd, then use a shared path as far as Claro Rd.

Go down Claro Rd, which is fairly quiet, until the bend in the road, Fork left on Claro Way and take the alley off to the left (now signposted) to the footbridge over the railway and the start of the Nidderdale Greenway.

Signs on Claro Way down the alley to the Nidderdale Greenway

From Starbeck, take The Avenue and the cycleway and footpath from the end of it, which is along the trackbed of a dismantled railway. It joins the Nidderdale Greenway just before Bilton Lane. The route is shown in purple on the map.

From Knaresborough, the Beryl Burton cycleway goes from the river Nidd at High Bridge to Bilton Lane. Bilton Lane crosses the Nidderdale Greenway near Old Bilton. This route is shown on the map in red.

In Spring 2014, an extension of the Greenway through Hollybank wood opened. It is shown in blue on the map.

Turn left off Main Street, Ripley, passing between the castle and the church, then carry straight on, past a gate and onto the public bridleway. A short distance further on, there are nice views of the castle and lake.

After the main Nidderdale Greenway, which is railway-flat, it might come as a shock to have climb a hill on the extension through Hollybank wood. At the end of the walking and cycle path, there's a gate, and you can continue along Hollybank Lane, which is now a very quiet country road.

Hollybank Lane brings you out at Clint.

From here, you can turn left down to Hampsthwaite (where there's a pub, and tea rooms), or turn right, following the signs towards Fountains Abbey (but on rather busier roads now). Otherwise return the way you came to Ripley.

The greenway may eventually go further. Read about the possible extensions of the Nidderdale Greenway to Pateley Bridge and Ripon.

1) It would be helpful to widen the Greenway. This is most needed on the stretch between Dragon Junction and Bilton Lane, and from Bilton Lane to the Nidd viaduct. These sections tend to be the busiest parts of the Greenway, and would benefit from some extra width.

2) Put in a crossing of Bilton Lane on a raised table, to a design like this.

3) It would be fantastic if the Greenway could be extended. How brilliant would it be to be able to cycle on a traffic-free (but tarmacked) surface from Harrogate to Pateley Bridge? Then you could go on and do a ride on quiet roads in Upper Nidderdale, without having to worry about being intimidated by vehicles on the way to Pateley Bridge.

4) And if the old line to Ripon could be opened up as a greenway, to link to the Nidderdale Greenway, we'd have the beginning of a genuinely good quality sustainable transport network, which could be used by utility cyclists as well as for recreation.

Do you have any more comments or suggestions? (Comments here are NOT for grumbling about other path users, though).